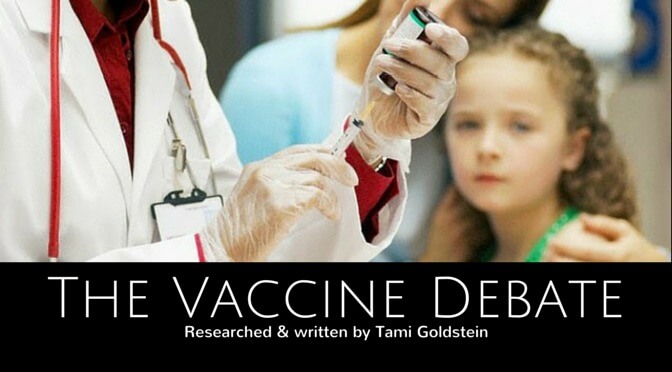 The Russian Roulette of Vaccines: The Vaccine Debate

By: Tami A. Goldstein, Author of Coming Through the Fog

The Nation is under a huge vaccine debate that is heated and emotionally charged. Most people are unaware of the risks associated with vaccinations.  Research studies, scientists and doctors worldwide recognize these dangers.  Where risk of injury or death is acknowledged, it is believed to be rare and inconsequential compared to the perceived benefits to individuals and society.

I want to point out that I am not anti-vaccine. I vaccinated both of my children until my youngest deteriorated into autism, food allergies, systemic skin rashes, serious immune system issues, severe anxiety and 40 seizures a day from the vaccines intended to keep her healthy. This is when I started questioning and researching vaccine safety.

There are 4 core issues at the vaccine debate:

1)    Are they safe?  Scientific studies and journal reports from around the world state otherwise.  These reports link certain vaccine injuries, illnesses and death to different vaccines and to the toxins which are added to the vaccines. In 2011 The US Supreme Court said that vaccines were, “unavoidable unsafe.”  Bruesewitz v. Wyeth LLC

2) The need for transparency of facts. Why is the other side not told?  The U. S mainstream media and certain governmental agencies have a media blackout on anything that contradicts the unified stance that vaccines are safe, period.

Topics not covered by U.S Mainstream media include:

Doctors are generally not educated on vaccines.  Dr. Suzanne Humphries, when asked what doctors learn in medical school about vaccines, said: “We learn that vaccines need to be given on schedule.  We are indoctrinated with the mantra vaccines are safe and effective, neither of which are true. Doctors today are given extensive training on how to talk to hesitant parents, how to frighten them by vastly inflating the risk during natural infection, on the necessity of twisting parents arms to conform or fire them from their practice.  Doctors are trained nothing bad should be said about vaccines.”

3) Freedom to opt out.  Why remove our right to informed consent and the choice to deny consent to vaccinate?

4) Politicians introducing mandated vaccine bills and the government enforcement of mandated vaccines violate the 1st, 4th, 5th and 14th Amendment to the U.S Constitution. People would be mandated to take and pay for all vaccines recommended. (The language in the vaccine Bill like SB277 in California for example states all recommended vaccines.) There are no provisions in the Bill regarding the number of vaccines recommended, when they need to administered, who will pay for the expense and currently there are approximately 200 vaccines waiting for approval.  Politicians are asking for consequences for failure to comply. Those consequences include; excluding unvaccinated children from school, including technical schools and colleges, children that receive any support from the government would lose all supports, adults not vaccinated would be fired from employment and or fined.

Parents have questioned the safety of vaccines since the 1800’s.  The Raggedy Ann doll became the symbol of the vaccine injury movement.  Johnny Gruelle (1880- 1938) created the doll for his daughter, Marcella (13), who died from a small pox vaccine administered at school without parental consent.  His vaccine concerns rage on because more and more children are being vaccine injured each year. Vaccine injury has been linked with seizures, asthma, autism, diabetes, cancer, inflammatory bowel disease, learning disabilities and other chronic illness, disability and death.

Below are some facts impacting the vaccine debate.  In an effort not to overwhelm you with the magnitude of this information, I touch on pharmaceutical improprieties, media-blackout and vaccine injury.  I touch on the current Measles issue, the HPV and the MMR vaccines and give you additional points to ponder. There is an overwhelming magnitude of information. Please access some of the resources to see the big picture.

Links and resources are listed at the end and are available at www.comingthroughthefog.com

In 1998, Dr. Andrew Wakefield and Dr. John Walker – Smith from England co-authored and published a report in the Lancet (Medical Journal) linking the MMR (Measles, Mumps and Rubella) vaccine to injury involving the gastrointestinal track.  Allegations from Brian Deer (a London Times reporter with motivation from the pharmaceutical companies) led to Dr. Andrew Wakefield’s and Dr. John Walker-Smith’s revocation of their medical licenses and removal of the report from the Lancet Journal. It started the misconception that the MMR was not linked to vaccine injury or autism.

In August 2014, Dr. Brian Hooker, researcher and father of a vaccine injured child, used the freedom of information act to get and verify the research submitted to the CDC (Center for Disease Control) by Merck Pharmaceutical for approval of the MMR vaccine.  Dr. Hooker had a taped conversation with Dr. William Thompson of the CDC.  When Dr. Hooker asked Dr. Thompson if he was aware of the research actually showing the link between the MMR vaccine and autism in what the CDC called Isolated Autism (normally developing children.), Dr. Thompson can be heard saying, “Oh My god…What Have we done.”  Dr. Thompson also confirms the CDC failure to disclose the fact that African American males were even more likely at 385 % to develop autism if vaccinated prior to 36 months.  Dr. Thompson has stated publically that he stands by his comments even though he was not aware he was being tape recorded. He has received full federal whistle-blower immunity to testify.

Update: A judge denied Merck’s injunction to block the hearing. The director of the CDC at the time of the CDC, MMR vaccine approval process became CEO of Merck Pharmaceutical developer of the MMR vaccine.

Update: Congress has yet to allow Dr. Thompson to testify

Decide for yourself; watch “Vaxxed from Cover up to Catastrophe.”

Dr. Walker-Smith and Dr. Wakefield appealed to the High Court in the UK to have their medical licenses reinstated. Dr. Walker-Smith’s was funded for his appeal process to defray the approximate $500,000.00 GBP expense. His license was reinstated October 14, 2014.

Dr. Wakefield was forced to abandon his appeal because he did not have the funds necessary to proceed. He now resides the U.S and continued his research surrounding vaccine injury.

There is a case pending in Pennsylvania, case #2:10-cv-04374-cdj United States VS Merck. The Department of Justice is involved. Former virologist now whistleblower allege that Merck falsified data with the MMR II vaccine in order to meet the 95 % efficacy rate which is the benchmark required by the FDA to maintain its monopoly on the mumps vaccine which extends to the MMR II. This suggests vaccine failure and fraud, not unvaccinated children, as the reason for the outbreaks.

# of Recommended Vaccines  vs.  Autism Prevalence

The latest MIT research by Dr. S. Seneff shows autism prevalence will be 1 in 2 by 2032 and 80% of the male population.

Vaccine Ingredients Injected into the Body

By 6 months old, a child is injected with approximately 2450mcg of aluminum if following the CDC recommended vaccine schedule.

The other side of the Measles story

By the mid to late 1940’s, the death rate from the Measles had already drastically declined.  The rates started to decline in the early 1900’s because of improved sanitary conditions, hygiene and the use of vitamin A to combat the disease.  The first Measles vaccine was licensed in 1963 but failed.  The second Measles vaccine was not introduced until 1968.  Little to no decrease in death rates was noted with the introduction of this vaccine.

Today’s “measles vaccine” is a combined version developed in 1971 with a second booster introduced in 1989.  It is the current MMR (Measles, Mumps and Rubella) vaccine that Dr. Brian Hooker found the link to autism and fraudulent study findings when duplicating the CDC and Merck Pharmaceutical research.

In the past 10 years in the U.S, there were zero deaths from Measles but 108 deaths caused by the Measles Vaccine.

… evaluating the effects of the quantity of vaccines given at one time and or the effect of the recommended 73 dosages from birth to age 18.  There is legislation pending requiring adult vaccination compliance.

… showing why vaccines follow one size fits all concepts that go against basic science.  No consideration is put into family history, genetics, or ethnicity.

We are the most vaccinated country in the world, yet we have the highest infant mortality rate, the highest autism rate and the highest cancer rate.  I’ve covered a very small amount of this colossal topic.  I encourage you to look at the issues surrounding each vaccine, like the DTaP vaccines causing Pertussis (Whooping Cough), Rotavirus vaccine causing intussusception (severe bowel obstruction) or the 202 death associated with it according the VAERS.  Look at the Flu (Influenza) vaccine;  it still contains 25 mcg of Thimerosal (a mercury preservative that the pharmaceutical companies and the CDC claim were removed from all vaccines because of its link to injury), or the fact the Flu vaccine is approved each year with no studies done what so ever.  If you judge the most dangerous vaccine by monetary compensation paid out by the Vaccine Injury Compensation Trust, the flu shot wins.

Are the vaccines safe?  Do you want the government to mandate vaccines?

Welcome to the Vaccine Debate.

Resources are listed below and on www.ComingThroughtheFog.com